The Commission’s thirty-ninth session, which is its most important biennial meeting, concluded today in Buenos Aires with a ceremony led by the Deputy Secretary-General of the United Nations, Amina Mohammed; the Minister of Foreign Affairs of Argentina, Santiago Cafiero; and the organization’s Executive Secretary, José Manuel Salazar-Xirinachs.
26 October 2022 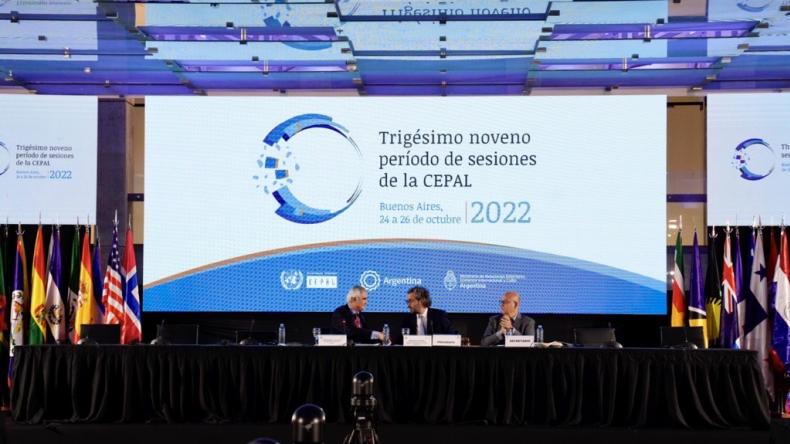 Government representatives from 33 member countries of the Economic Commission for Latin America and the Caribbean (ECLAC) concluded today the United Nations regional commission’s thirty-ninth session, held in Buenos Aires, Argentina on October 24-26, with the approval of the proposals presented by ECLAC to propel a change in the development pattern and to promote ambitious, transformative actions for a sustainable recovery, following the cascade of crises the region has endured in the last few years.

The Commission’s most important biennial meeting came to a close with remarks by Santiago Cafiero, Minister of Foreign Affairs, International Trade and Worship of Argentina, the country that will serve as chair of the organization for two years, starting now; José Manuel Salazar-Xirinachs, Executive Secretary of ECLAC; and Amina Mohammed, Deputy Secretary-General of the United Nations (by video message).

In total, the session was attended by 630 participants from governments, the United Nations system, intergovernmental organizations, academia and civil society. These included 33 member countries (27 of them from the region), 20 foreign ministers from Latin American and Caribbean countries, and 14 representatives of UN system agencies, funds and programs.

The closing ceremony was preceded by a meeting of Ministers of Foreign Affairs and high-level authorities from the countries of Latin America and the Caribbean, at which they agreed on the urgency of consolidating efforts and spaces to move towards an integration that would allow the region to reach the global scenario with a single voice and to lay the foundations for a transformative reconstruction with a view to a new development pattern.

In her remarks delivered by video, the Deputy Secretary-General of the United Nations, Amina Mohammed, indicated that renewed forms of cooperation will be needed to mobilize sustainable investments and to build national and regional capacities. “ECLAC can count on the continuous support of the UN System in achieving the Sustainable Development Goals (SDGs) in Latin America and the Caribbean,” she declared.

Meanwhile, ECLAC’s Executive Secretary, José Manuel Salazar-Xirinachs, expressed in his final speech that these have been three days of careful listening, of getting to know one another, of identifying together the challenges that we face, as well as the extensive possibilities we have for collaboration, cooperation and dialogue.

With regard to ECLAC’s position document presented during the meeting, Towards transformation of the development model in Latin America and the Caribbean: production, inclusion and sustainability, which was widely welcomed by the delegations in attendance, Salazar-Xirinachs said that “the lesson that we glean from its discussion is that we must redouble efforts both to navigate the choppy waters in the short term, as well as to face the legacy of gaps and shortcomings that characterized us before the pandemic and the war in Ukraine, and that have been exacerbated by these events.”

“Just as the Foreign Ministers indicated in their dialogue this morning, we have in each country and in the region as a whole many assets and many instruments for promoting sustainable and inclusive development, raising the standard of living, and opening opportunities for decent work and a decent life, without leaving anyone behind,” ECLAC’s Executive Secretary stated.

“You can count on ECLAC to continue reflecting on regional strategies for emerging from these crises, in the quest for transformative consensuses for designing public policy and in the timely implementation of the 2030 Agenda for Sustainable Development,” he concluded.

At the end of the thirty-ninth session, the countries unanimously approved a document of resolutions that recognizes the work of ECLAC as a center of excellence charged with collaborating with Member States in a comprehensive analysis of development processes geared to the design, monitoring and evaluation of public policies, together with operational services in the fields of specialized information, advisory services, training and support for regional and international cooperation and coordination.

Also approved in the resolutions is the 2023-2024 calendar of conferences of ECLAC and the Commission’s programme of work and priorities for 2024, and it was determined that the countries that will accompany Argentina as vice-chairs of the Commission for the 2022-2024 period will be Costa Rica, Cuba, Jamaica and Peru.

Finally, the delegates also accepted by acclamation Peru’s offer to be the site of the fortieth session of ECLAC, in 2024.

Towards transformation of the development model in Latin America and the Caribbean: production, inclusion and sustainability 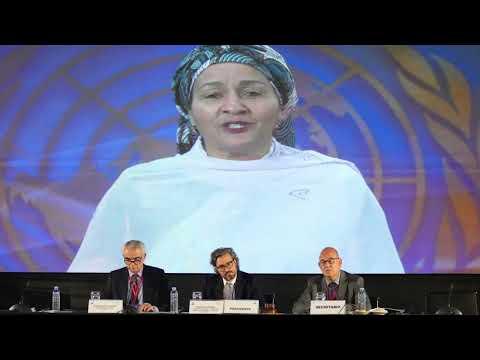 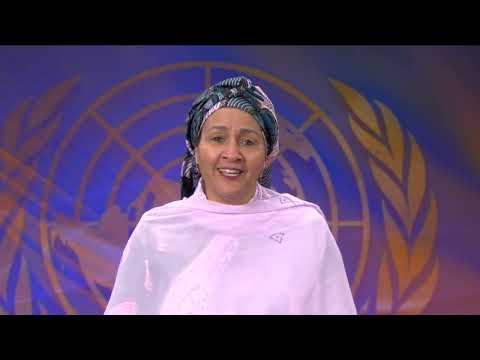