Home » Press centre » Latin America and the Caribbean Must Speak with a Single Voice and Build Consensus for a Transformative Reconstruction
Available in: EnglishEspañol

Foreign Ministers and high-level authorities, along with prominent political figures from outside the region, met in the framework of the thirty-ninth session of ECLAC, which ends today in Argentina.
26 October 2022 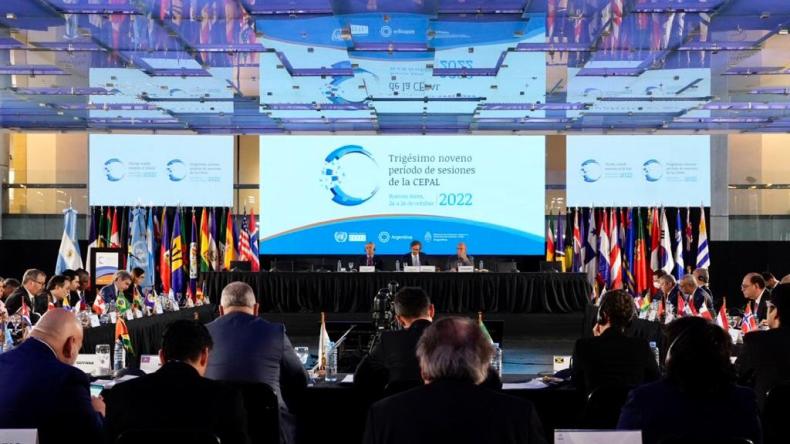 Ministers of Foreign Affairs and high-level authorities from Latin American and Caribbean countries, along with prominent political figures from outside the region, agreed today on the urgency of consolidating efforts and spaces to move towards an integration that would allow the region to reach the global scenario with a single voice and lay the foundations for a transformative reconstruction with a view to a new development pattern.

On the final day of the thirty-ninth session of the Economic Commission for Latin America and the Caribbean (ECLAC) – which took place from Monday, October 24 to Wednesday, October 26 in Buenos Aires, Argentina – the authorities reaffirmed ECLAC as the promoter of a rigorous and analytical dialogue in which all the region’s voices converge.

The meeting was presided over by Santiago Cafiero, Minister of Foreign Affairs, International Trade and Worship of Argentina, the country that is serving as Chair of ECLAC. The speakers included José Manuel Salazar-Xirinachs, Executive Secretary of the United Nations regional commission, and Josep Borrell, High Representative for Foreign Affairs and Security Policy of the European Union and Vice-President of the European Commission.

The Minister for Foreign Affairs, European Union and Cooperation of Spain, José Manuel Albares, also spoke, along with nine Deputy Ministers and senior representatives of countries from both inside and outside the region.

“ECLAC has been and must continue to be that place where we are able to bring important and difficult conversations to the table,” José Manuel Salazar-Xirinachs affirmed in his remarks.

He added that in Latin America and the Caribbean, “we must be capable of carrying out multilateral and multi-stakeholder dialogues that would enable us to listen with careful respect to the diverse views that coexist in the region and, based on this, build regional consensuses that would allow us to lay the foundations for shared assessments, and public policy proposals that can be sustainable over time.”

Salazar-Xirinachs stressed that the shared goal, in this post-pandemic era and for 2023, cannot be solely to mitigate the damage that COVID-19 inflicted and reactivate the economy.

“Of course we must mitigate the damage, such as the increase in poverty, informality and inequality, and address the educational blackout, but this is also about promoting transformative actions for development, it’s about the region’s countries progressing, being able to escape the middle-income trap and fulfill the legitimate dream of being socially inclusive countries based on dynamic, sustained, sustainable and inclusive growth,” he stated.

The Foreign Minister of Argentina, Santiago Cafiero, meanwhile, emphasized that the enormous challenges faced by Latin American and Caribbean people are founded on historical inequality gaps in the region, productive and gender gaps, which are compounded by the current problems.

“The dialogue we are holding today not only enriches the debate but, fundamentally, the projections for finding that path that would make our continent move towards human, economic development, with social justice,” the Minister underscored.

He added that the “road map” proposed by ECLAC in its position document entitled Towards transformation of the development model in Latin America and the Caribbean: production, inclusion and sustainability “could not be more current.”

“Those of us from Latin America and the Caribbean have tools to overcome the current situation. We have tools to generate the knowledge needed to surmount all the vicissitudes in our continent. That is why I congratulate the work that ECLAC has carried out historically. ECLAC was never a technocratic body, it always had life, soul, spirit and challenged itself in the most stressful of circumstances,” he said.

In his remarks, Josep Borrell, High Representative for Foreign Affairs and Security Policy of the European Union and Vice-President of the European Commission, expressed his interest in relaunching and renewing the relationship with Latin America and the Caribbean.

“I would like to deliver a message in these turbulent times, amid a global geopolitics severely altered by Russia’s war against Ukraine: more than ever, this is an appropriate time to relaunch the relationship between Latin America and the Caribbean and the European Union. For the European Union, relaunching and renewing this relationship is a budgetary and priority task,” he affirmed.

He added that both regions must address in what way they will work together and react to a global shock that is not passing.

“How do we adapt to a new geopolitical and geo-economic scenario? How can we increase the capacity of our economies and societies, their resilience? Fleeing captive markets, seeking reliable partners to be able to diversify our actions,” he sustained.

Dialogue of ministers of foreign affairs and high-level authorities 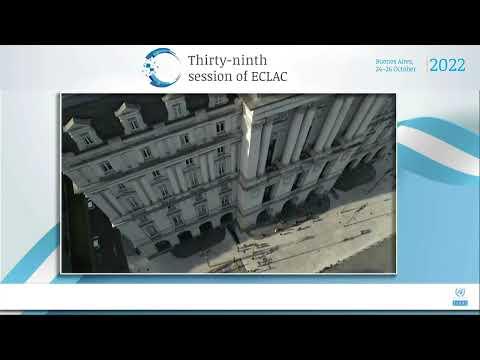