Home » Press centre » Solidarity-based and Collective Regional Cooperation is Key to Bulding Back a Better Future
Available in: EnglishEspañol

In the framework of ECLAC’s 38th session, the Member States of the Committee on South-South Cooperation discussed new challenges for middle-income countries in the context of the COVID-19 pandemic.
27 October 2020 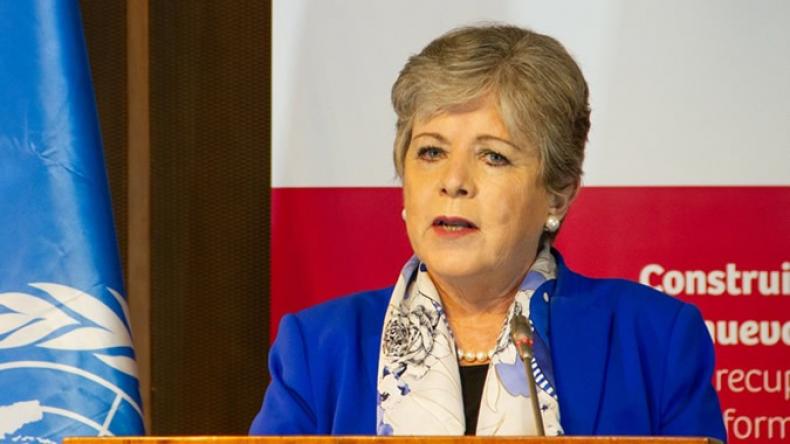 Solidarity-based and collective regional cooperation is key to building back a better future, the member countries of the Committee on South-South Cooperation expressed on Monday 26 October upon meeting in the framework of the thirty-eighth session of the Economic Commission for Latin America and the Caribbean (ECLAC), which is being held virtually through October 28.

The opening remarks at the gathering of this subsidiary body of ECLAC were delivered by Déborah Rivas, Deputy Minister of Foreign Trade and Investment of Cuba, and Rodolfo Solano Quirós, Minister for Foreign Affairs and Worship of Costa Rica, in his capacity as Chair of ECLAC and of the Committee on South-South Cooperation.

Déborah Rivas affirmed that Cuba, which had served as Chair of the Committee until this day, will continue supporting all the countries that need it on implementation of the 2030 Agenda and to confront the pandemic and its effects.

“ECLAC’s Committee on South-South Cooperation must be able to respond to the current crisis and strengthen its actions to effectively support national and multilateral efforts to counteract the pandemic,” the Deputy Minister said.

During her remarks, Rivas presented a brief report on the South-South Cooperation activities carried out since the thirty-seventh session of ECLAC and underscored that her country ratifies its commitment to the promotion and awareness of South-South relations and social development.

Meanwhile, Costa Rica’s Foreign Minister, Rodolfo Solano, stated that during ECLAC’s presidency his country will be focused on regional political coordination and cooperation, cooperation with international financial institutions, support for the United Nations System, and international protection and safeguarding of human rights.

He added that in the current context, more than ever, solidarity-based cooperation is indispensable for achieving the Goals of the 2030 Agenda for Sustainable Development.

“On behalf of Costa Rica, I want to thank ECLAC for the invaluable support it provides our countries, walking neither in front of nor behind us, but alongside us,” he said.

After the meeting’s inauguration, a panel discussion was held in which participants included Juan Ignacio Roccatagliata, Director of Multilateral Cooperation of Argentina; Simone Rudder, Permanent Secretary of the Ministry of Foreign Affairs of Barbados; Alison Stone Roofe, Under-Secretary of the Multilateral Affairs Division of the Ministry of Foreign Affairs and Foreign Trade of Jamaica; Gabriel Terres, Advisor to the Executive Director of the Mexican Agency for International Development Cooperation (AMEXCID); and Tarik Iziraren, Deputy Director for Policy and Strategic Partnership of the United Nations Office for South-South Cooperation (UNOSSC).

After those remarks, a second panel entitled “Development in transition: challenges for middle-income countries in the context of the COVID-19 pandemic” took place, in which the participants were Mario Cimoli, Deputy Executive Secretary of ECLAC; Jolita Butkeviciene, Director for Latin America and the Caribbean at the Directorate-General for International Cooperation of the European Union; Mario Pezzini, Director of the Development Centre of the Organisation for Economic Co-operation and Development (OECD); Volker Oel, Deputy Director-General for Latin America and the Caribbean at the Federal Ministry for Economic Cooperation and Development (BMZ) of Germany; Sergio Alfaro, Ambassador of Costa Rica to the Kingdom of Belgium and the European Union; and Mariano Berro, Director of the Uruguayan International Cooperation Agency (AUCI).

The event’s closing remarks were delivered by Alicia Bárcena, ECLAC’s Executive Secretary, who emphasized that south-south cooperation will be key to the process of recovering from COVID-19, especially to strengthen regional integration with positive repercussions on trade and financial flows, technological capacities and economic growth.

Alicia Bárcena highlighted the existing partnership between ECLAC, the European Union, the OECD and Germany, at a time when it is critical to bolster political and economic regional agreements and to deepen cooperation ties with other geographical areas.

“We have no alternative, solidarity-based and collective regional cooperation is the only enabling condition for Latin America and the Caribbean to be able to have some degree of influence on the process of redefining global governance, which is already being foreseen as one of the consequences of the prolonged deterioration of the dominant development pattern and its exacerbation due to the COVID-19 pandemic,” Bárcena stated.

She added that it is necessary to reconsider the criteria used to measure and classify development stages and to suspend the “graduation” of middle-income countries during the pandemic.

“We want to build back better, we want to move towards the future in a different way, with greater equality and sustainability,” she concluded.

It is worth noting that the current Presiding Officers of the Committee on South-South Cooperation comprise Argentina, Cuba, Mexico and Peru, with Costa Rica serving as Chair.

Adoption of the agenda and election of officers

Report on South-South cooperation activities carried out since the thirty-seventh session of ECLAC, by Déborah Rivas, Deputy Minister of Foreign Trade and Investment of Cuba, in her capacity as outgoing chair of the Committee on South-South Cooperation

Panel “Development in transition: challenges for middle-income countries in the context of the COVID-19 pandemic”