Home » Press centre » Foreign Ministers and High-level Authorities from Latin America and the Caribbean Sign a Political Declaration for a Sustainable, Inclusive and Resilient Recovery in the Region
Available in: EnglishEspañol

Foreign Ministers and High-level Authorities from Latin America and the Caribbean Sign a Political Declaration for a Sustainable, Inclusive and Resilient Recovery in the Region

In the framework of ECLAC’s 38th session, Foreign Affairs Ministers urgently called for solidarity, multilateralism and international cooperation to be intensified at all levels.
26 October 2020 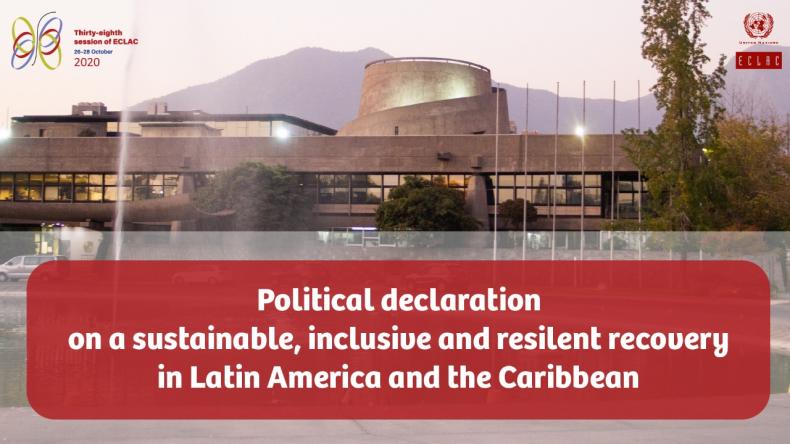 Ministers of Foreign Affairs and high-level authorities from Latin American and Caribbean countries signed a political declaration today for a sustainable, inclusive and resilient recovery, in the framework of the thirty-eighth session of the Economic Commission for Latin America and the Caribbean (ECLAC), which is taking place virtually from October 26 to October 28.

The declaration was unveiled during the Dialogue of ministers of foreign affairs and high-level authorities of Latin America and the Caribbean on the post-pandemic economic recovery, which was inaugurated by Rodolfo Solano, Minister of Foreign Affairs and Worship of Costa Rica, in his capacity as President of the United Nations regional commission’s 38th session, along with Alicia Bárcena, ECLAC’s Executive Secretary.

During the event, 28 foreign ministers and senior authorities expressed their shared view that international financial solidarity, renewed multilateralism and the strengthening of regional integration are urgently needed for a post-COVID-19 recovery with equality and sustainability.

“This political declaration constitutes for us at ECLAC, not only a mandate and guide for developing our mission, but also a fundamental sign that it is possible for the region to raise a single voice amid the historic challenges that this crucial time requires us to face. Today, as the United Nations commemorates its 75th anniversary, we can say that here within the framework of ECLAC, Latin American and Caribbean multilateralism, its vocation for cooperation and integration, has expressed itself yet again, strongly and clearly,” Alicia Bárcena affirmed in her remarks.

In the political declaration, the high-level authorities urgently called for solidarity, multilateralism and international cooperation to be intensified at all levels, including North-South, South-South and triangular cooperation, as well as partnerships between the public and private sectors, to contain, mitigate and overcome the pandemic and its consequences through people-centered responses that would take gender issues into account and fully respect human rights and fundamental freedoms.

Furthermore, they requested the swift and effective mobilization of resources to tackle development problems, and they encouraged Member States and other interested parties – including the private sector and international financial institutions – to mobilize a coordinated, comprehensive and large-scale global response to the COVID-19 pandemic and its consequences.

In addition, they urged States to refrain from promulgating and applying unilateral measures of an economic, financial or trade-related nature that are incompatible with international law and the United Nations Charter and that would impede the full attainment of economic and social development, particularly in developing countries.

“We stress that recovery from the pandemic should be an occasion to enhance and support the development policies of Latin America and the Caribbean while strengthening democracy and fulfilling human rights, and we recognize the importance of developing recovery plans that promote sustainable development and drive transformative change towards peaceful, just and inclusive societies,” the authorities stated.

The ministers from the region warned about the special difficulties faced by developing countries in this crisis, in particular Small Island Developing States (SIDS) and landlocked developing nations, as well as the specific difficulties that middle-income countries confront.

They also urged Member States and international financial institutions to provide more liquidity in the financial system, especially in all developing countries, including by implementing instruments such as a liquidity and sustainability mechanism to inject liquidity into developing economies and to support sustainable investments. Furthermore, they expressed support for continued examination of the broader use of special drawing rights to increase the resilience of the international monetary system.

They also stressed the need to increase international climate finance, which is separate from official development assistance, and to ensure greater access to it in order to support developing countries’ mitigation and adaptation efforts.

Likewise, they welcomed innovative financing mechanisms such as the initiative to swap debt for climate change adaptation measures for the Caribbean, along with ECLAC’s “Caribbean first” initiative.

In the political declaration, they also urged Member States and other relevant stakeholders to accelerate the catalytic role that digital technologies play in reducing the impact of the COVID-19 pandemic on education, health, communications, commerce and economic recovery, and to ensure a path towards the achievement of the Sustainable Development Goals while also making progress on closing the digital gap, including the gender digital divide.

In addition, they recognized that inequalities – and widening inequality gaps even more so – continue to be a predominant trait in Latin American and Caribbean countries, even in those with high economic growth, and they underscored that in order to reduce inequalities, it is necessary to increase investment in social services, particularly social protection services, as well as to foster economic opportunities.

“Economic growth needs to be sustained, inclusive and equitable,” they emphasized.

In the framework of the meeting, Alicia Bárcena, ECLAC’s Executive Secretary, presented a document entitled Reconstruction and transformation with equality and sustainability in Latin America and the Caribbean, which calls on the region’s countries to strive for deep transformations that would allow for moving towards an inclusive and sustainable development model.

“A successful strategy for facing this crisis cannot be centered on returning to the previous situation, but instead should interpret the crisis and strong regional disenchantment as a breaking point with regard to the development model’s continuity, thus demanding profound transformations that would ensure a balance between economic growth, social inclusion and environmental sustainability,” the senior United Nations official stated during the presentation.

She added that these transformations will require progress on political and social compacts forged with broad participation by many actors and which, through dialogue and transformative leaderships, would enable moving towards consensuses to universalize social protection and reorient development on the basis of equality, with redistributive fiscal, industrial and environmental policies for sustainability. She also called for ensuring gender equality and the empowerment of all women and girls throughout their lifetimes, promoting peaceful, fair and inclusive societies in which no one is left behind, and at the same time preserving the planet for future generations.

Alicia Bárcena emphasized that regional and international solidarity will be critical for rebuilding and transforming with equality and sustainability, in support of progress for all, and contributing with a unified voice to a global compact for the provision of public goods such as climate security, global health (universal vaccine), peace and financial stability.

Finally, she stressed that the 2030 Agenda is more relevant today than ever before and that efforts must be redoubled to achieve the Sustainable Development Goals and tackle the inequality that defines the region.

During the meeting, the participating countries welcomed Mexico’s proposal to hold a United Nations General Assembly to organize the post-pandemic economic and social recovery on the basis of justice and fraternity.

Political declaration on a sustainable, inclusive and resilient recovery in Latin America and the Caribbean LIVE BROADCAST Full programme of the meeting Photo gallery

Other special statements by representatives of member countries of ECLAC

Statements by representatives of the associate members of ECLAC