Home » Press centre » Authorities from Latin America and the Caribbean and the United Nations Call for Changing the Development Model to Overcome the Current Crisis and Build Back Better, Upon Inaugurating ECLAC’s Thirty-Eighth Session
Available in: EnglishEspañol

Authorities from Latin America and the Caribbean and the United Nations Call for Changing the Development Model to Overcome the Current Crisis and Build Back Better, Upon Inaugurating ECLAC’s Thirty-Eighth Session 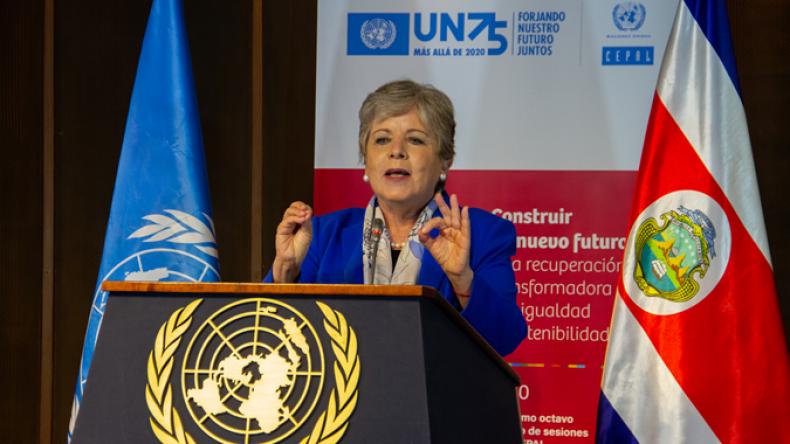 Alicia Bárcena, ECLAC Executive Secretary, during the opening ceremony of the 38th session of the Commission.

The thirty-eighth session of the Economic Commission for Latin America and the Caribbean (ECLAC) – the United Nations regional organization’s most important biennial gathering – was inaugurated today with a call to change the development model and redouble efforts aimed at a post-COVID-19 recovery guided by the principles of inclusive development, equality and sustainability.

The meeting – which will conclude on Wednesday, October 28 and is taking place virtually for the first time in the organization’s history, due to the pandemic – was inaugurated by the Presidents of Costa Rica, Carlos Alvarado, and Cuba, Miguel Díaz-Canel, along with the UN Secretary-General, António Guterres; ECLAC’s Executive Secretary, Alicia Bárcena; the Secretary-General of the Organisation for Economic Co-operation and Development (OECD), Ángel Gurría; and the Managing Director of the International Monetary Fund (IMF), Kristalina Georgieva (via video message).

The session is being attended by authorities and representatives from ECLAC’s 46 member states and 14 associate members; from the agencies, funds and programs of the United Nations system in the region; its 25 resident coordinators; representatives of society at its most diverse, as well as academic institutions, trade-union organizations, and prominent figures from the private sector.

In his opening remarks, the UN Secretary-General, António Guterres, expressed his satisfaction at being present once again for the inauguration of ECLAC’s session, since he also participated in the opening segment of the thirty-seventh gathering, held in 2018 in Havana, Cuba.

“I meet with you again today in a world that is very different from that one, and I am obligated to do so at the physical distance compelled by the COVID-19 pandemic. The year 2020 has put the world in an unprecedented scenario. There is no country or person that escapes the effects of the pandemic. This places cooperation and multilateralism at the center of our work, more than ever,” the highest authority of the United Nations indicated.

“The pandemic marks a before and after, and it is sending a clear message to the world: solidarity is, today more than ever, our only lifeline. In July, I presented a special report on the effects of COVID-19 in the region. In it, we analyzed multiple inequalities and vulnerabilities and highlighted the need for a profound change in the development model,” Guterres recalled.

“In that vein, ECLAC will present tomorrow its new document, Building a New Future: Transformative Recovery with Equality and Sustainability. This document provides specific follow-up on the principles that I laid out in the General Assembly about the urgency of moving towards a new social and environmental global compact that includes a sustainable energy transition,” stated the Secretary-General, who also reiterated the United Nations’ commitment to supporting the region’s countries and accompanying them on their efforts to confront this challenge, and to imagine a new development paradigm that would be inclusive, egalitarian and sustainable.

Meanwhile, the President of Cuba, Miguel Díaz-Canel, stressed the importance of articulated cooperation among countries at all levels to be able to overcome the multiple crises faced by Latin America and the Caribbean.

“It is indispensable that we continue backing renewed and strengthened multilateralism, solidarity-based cooperation and the quest for concerted and innovative solutions. There can be no development without peace, nor peace without development. We reiterate our commitment to solidarity-based cooperation on the basis of mutual respect, disinterested help and complementarity, under the unwavering principle of sharing what we have, not what we have left over,” the President stated.

He also praised the actions of ECLAC – and in particular its Executive Secretary, Alicia Bárcena – for her dedication and efforts in pursuit of sustainable development in Latin America and the Caribbean, and he expressed his support and best wishes to Costa Rica, the country to which Cuba is handing over ECLAC’s Presidency during the Commission’s thirty-eighth session.

Meanwhile, in a message sent to the gathering, the IMF’s Managing Director, Kristalina Georgieva, said that the pandemic is above all a human tragedy. “Latin America and the Caribbean is particularly hard hit. It is an economic tragedy as well. The region won’t regain pre-pandemic GDP levels until 2023. And inequality is expected to increase further,” she stated.

Georgieva explained that since the beginning of the crisis, the IMF has extended its financial support to the region in the form of $64 billion dollars, and she expressed its willingness to do more, above all to be a reliable and committed partner to countries.

“We must pursue this one in a century shot to build a world that is fairer and more equitable, that is greener and more sustainable, smarter and more resilient to climate change and other shocks. A world our children deserve,” the Fund’s top official concluded.

In his remarks, the OECD’s Secretary-General, Ángel Gurría, indicated that to ensure a sustainable and inclusive recovery, the countries of Latin America and the Caribbean must take advantage of the crisis to renew the social compact, positioning people’s welfare as the main objective of public policies.

“The region is facing one of the most severe crises in its history. The only way to emerge from it and to prevent something so serious from happening again is to build back better. In Latin America, that means putting emphasis on well-being and social cohesion,” he stated.

Meanwhile, in her speech to inaugurate the thirty-eighth session of ECLAC, Executive Secretary Alicia Bárcena highlighted the deep vocation for integration and multilateralism of Costa Rica, the country that is taking over ECLAC’s Presidency as of today, while also underlining the support, leadership, commitment and collaboration provided by Cuba during its two years in charge of the Commission’s Presidency.

“COVID-19 has thrown into relief and magnified the structural problems of the development model in Latin America and the Caribbean: intersecting inequalities, mediocre growth, low productivity, poorly diversified exports, scant fiscal space, and increasing environmental deterioration. Just as the Secretary-General, António Guterres, said in his report on the crisis’s impact in the region, the recovery from the pandemic should be an occasion to transform the development model of Latin America and the Caribbean while strengthening democracy, safeguarding human rights and sustaining peace, in line with the 2030 Agenda for Sustainable Development,” the senior United Nations official stated.

In light of the difficult scenario prompted by the crisis – with a sharp economic contraction of -9.1% and a -14% drop in regional trade, an increase in unemployment affecting 44 million people, a rise in poverty affecting 45 million, with especially severe impacts on women, young people, indigenous and Afro-descendant persons as well as migrants – Bárcena highlighted the seven proposals that ECLAC has put forth to connect the emergency with the recovery: 1) Extending the emergency basic income to the entire population living in poverty for 12 months; 2) Extend maturities and grace periods for loans to micro-, small and medium-sized enterprises (MSMEs); 3) introduce a basic digital basket to provide digital inclusion for 40 million households that are not connected; 4) adopt expansionary fiscal and monetary policies to sustain a longer period of spending with non-conventional domestic and international instruments; 5) International solidarity: provide debt relief in the Caribbean and alleviate interest payments in Central America with the creation of subregional resilience funds; 6) design recovery and investment plans around dynamic sectors, with nature-based solutions; and 7) Close gaps to achieve universal health and social protection regimes.

“The position document that we will unveil tomorrow sets forth economic evidence on the importance of implementing a virtuous combination of social and environmental policies, which, along with economic, technological and industrial policies, must form the basis for a new development model. With this document we set forth in black and white the urgent need for growth to support equality, and for equality to support growth,” Alicia Bárcena emphasized.

“We propose to replace the culture of privilege with a culture of equality that guarantees rights, builds citizenship, and spreads capabilities and opportunities. New forms of global governance are needed to collectively provide global public goods, such as universal health care (a coronavirus vaccine for all), climate security and protection of the atmosphere, financial stability, peace and human rights,” ECLAC’s Executive Secretary stated.

Finally, and to officially inaugurate the meeting, the President of Costa Rica took the floor, indicating that his country assumes ECLAC’s Presidency with great enthusiasm and reaffirming its commitment to furthering this Commission’s mandate by embracing the principles of international cooperation, solidarity and the promotion of human rights, leaving no one behind.

“The pandemic has exposed the deep development gaps that exist across our societies: inequality, poverty, job insecurity, the technological gap, precarious urbanization and gender inequality,” President Alvarado stated. “These are very complex times for the region and for each of our countries. That is why the discussions taking place over these three days will be more relevant than ever.”

“Heavy indebtedness and narrow fiscal space limits States’ possibilities for responding adequately to the effects of the pandemic. Given this situation, existing policies are insufficient. That means we must incorporate more actors into the dialogue. We must build new social compacts. All sectors are being called upon to contribute,” the Costa Rican leader emphasized.

“We are calling on the international and regional community to agree to a global plan, similar to a ‘Marshall Plan,’ for recovering from the pandemic and its economic and social consequences, which according to the UN will likely amount to at least 10% of global GDP. As part of that global plan, it is necessary to increase liquidity and access to financing under favorable conditions to our countries. That is why we have developed the Fund to Alleviate COVID-19 Economics (FACE) proposal,” President Alvarado indicated.

The President of Costa Rica also thanked ECLAC and Alicia Bárcena for their clarity and their tools and comprehensive proposals for confronting the crisis. “Our response to current challenges must address the three structural crises that ECLAC delineates: the crisis of inequality, the economic crisis and the environmental crisis. There is only one way forward: getting through this and getting better, leaving no one behind and ‘taking the bull by the horns,’” Alvarado concluded.

During the thirty-eighth session of ECLAC, a dialogue on the post-COVID-19 economic recovery will take place between foreign affairs ministers and high-level authorities from Latin America and the Caribbean, and the Committee on South-South Cooperation will meet. Tomorrow (Tuesday, October 27), the Commission’s Executive Secretary, Alicia Bárcena, will present the position document entitled Building a New Future: Transformative Recovery with Equality and Sustainability, while on Wednesday, October 28, ECLAC will distribute its activities report on the work carried out by the Commission and its subsidiary bodies, and participants will define the mandates that will guide its work in 2022. 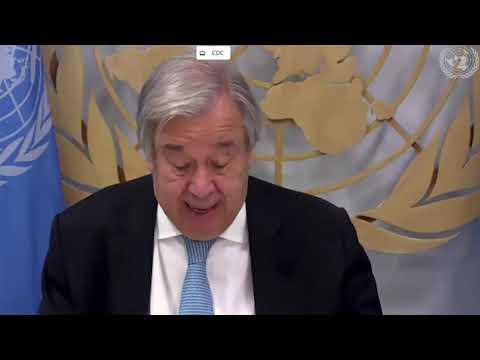 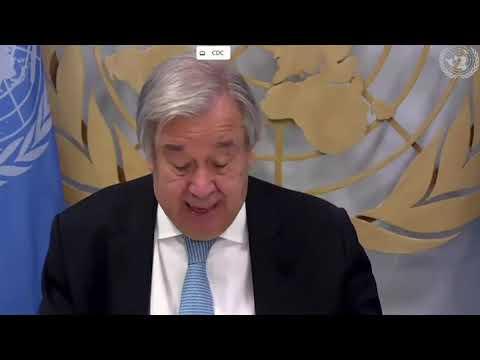