Alicia Bárcena took office as the Executive Secretary of the Economic Commission for Latin America and the Caribbean (ECLAC) on 1 July 2008.

She also founded and ran the Earth Council in Costa Rica, a non-governmental organization responsible for following up the agreements reached at the United Nations Conference on Environment and Development (UNCED) held in Rio de Janeiro (Brazil) in 1992.

Alicia Bárcena has taught and conducted research at the National Autonomous University of Mexico (UNAM) and published numerous articles on sustainable development, public policy, environmental issues and public participation. A Biology graduate, she holds a master’s degree in Public Administration from Harvard University. She has completed the courses for a master’s degree in Ecology and begun studying for a doctorate in Economics at UNAM. She has been awarded honorary doctorates by the University of Oslo in Norway (2014) and the University of Havana in Cuba (2016).

Presentation of The Caribbean Outlook: forging a people-centred approach to sustainable development post-COVID-19, by Alicia Bárcena, Executive Secretary of ECLAC

Presentation of the position document prepared by ECLAC, entitle Building a New Future: Transformative Recovery with Equality and Sustainability, by Alicia Bárcena, Executive Secretary of the Commission 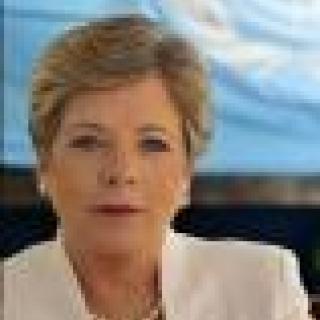